Give you and your car the privacy & protection it needs

At White Glove Auto we pride ourselves at being on the cutting edge of technology. We not only use the highest quality materials but we also computer cut our films to your vehicle’s exact window specifications.
We Offer 3 Levels of Tint Packages

Once we have your vehicle selected in our advanced software system, we simply point, click and go!

Be able to roll down your windows right after you leave our shop!

Covers accidental or maliciously damaged window film. For the entire time that you own the vehicle.

6 inch maximum from top of windshield

PRIME CS – XPEL (Color Stable Dyed Film)
Warranty – Transferable Lifetime Warranty
When it’s all about the look of your vehicle and the image you want to project, the go-to choice is PRIME CS Series. The soft charcoal look is available in a variety of shades. Select the one that complements your style then enjoy the enhanced look of your car.

PRIME XR PLUS – XPEL – (Multi-layer Nanoparticle Ceramic Film)
Warranty – Limited Lifetime Transferable
XPEL PRIME XR PLUS is engineered for improved comfort and less distracting glare. This newest window tint technology infused with infrared absorbing properties rejects up to 71 percent of solar heat to enhance your driving experience. And it shields your passengers from more than 99 percent of harmful UV rays* while it helps reduce interior fading and cracking due to UV ray exposure. This film contains a proprietary blend of ceramic particles to act as a solid barrier to infrared heat while maintaining the ease of install in a 1.5 mil construction.

Factors may help in the decision making process. Some things to consider:

Window tinting is a great way to protect your interior and your skin from damaging UV rays from the sun as well as just keeping you and the interior of your car much cooler in the hot months! Window film has been around for decades, but over the years film technology has advanced tremendously! Most people are not aware that there are different types of window tints. They assume that tint is just tint. But that is far from the truth! When you are looking for window tint tulsa at White Glove Auto. We do our best to answer any of your questions and to educate about the types of window film. 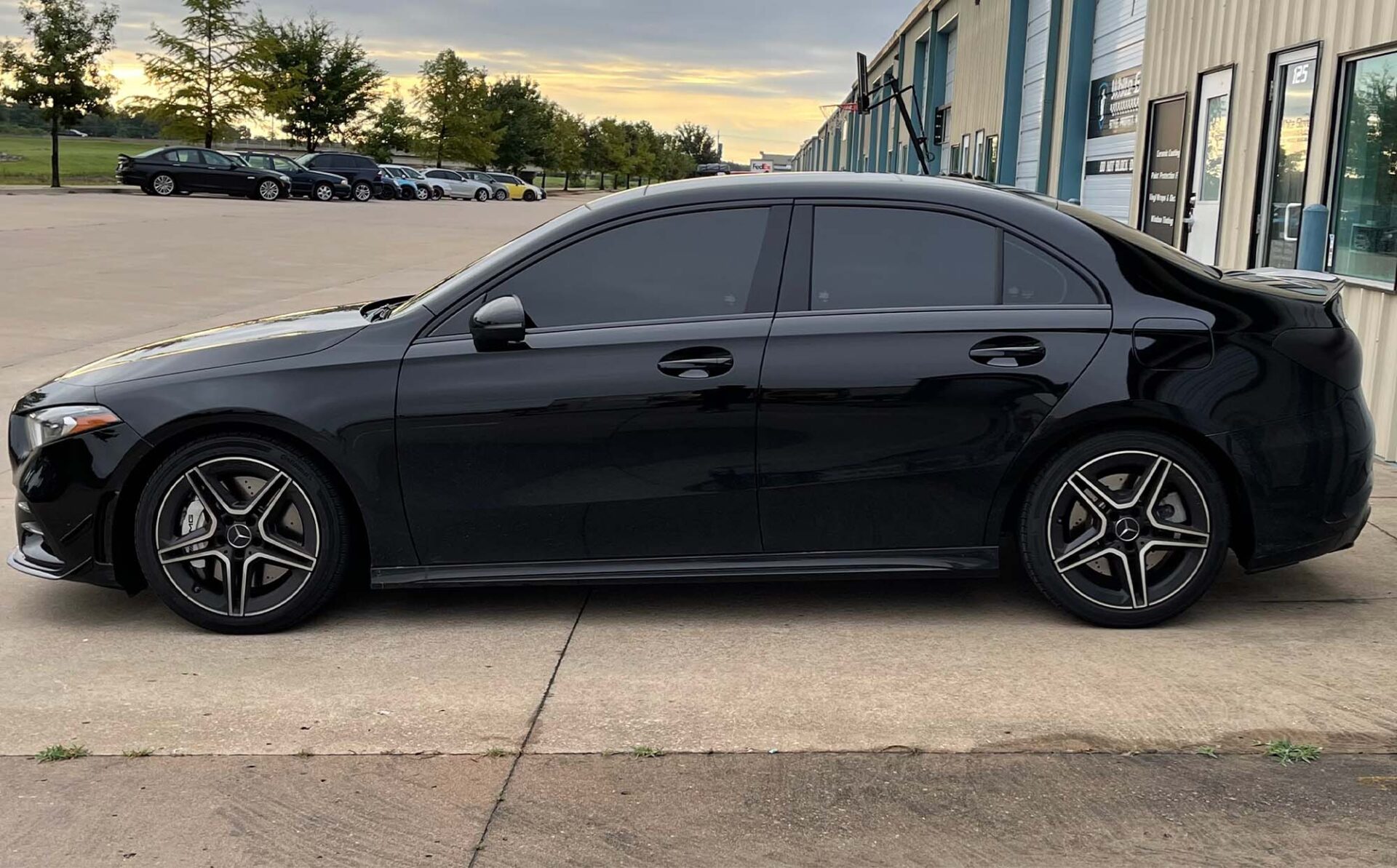 What are the different types of window film?

The majority of what most people will see when they look for window tint tulsa is dyed, metalized, or ceramic window films. One may think there isn’t much of a difference and that all tint is just tint and it all does the same thing. This is where we like to educate our clients to ensure they are getting a truly great product that meets their needs. Dyed window film is typically on the cheaper end, most dyed window film offers a low heat rejection rating usually around the 30-45% range. Then you have metalized window films which is where the film its self actually has a super-thin metal layer inside the layers of the film, the metal helps reflect heat even better, some metalized films see upwards of 60-65% heat rejection. But the downside of the metalized film is that it can interfere with electronic signals such as cell phones, GPS, or Pike Passes, etc. Then you have your ceramic window films which is newer technology. Ceramic particles in the tint block heat and IR heat greatly! Such as our XPEL Prime XR Plus that rejects upwards of 90% of the heat. This is a huge number! We have displays in our showroom that actually display the amount of heat that each film rejects and you can actually physically feel the heat difference.

How does window film protect you & your interior?

Most window films on the market will have a UVA & UVB rating. This puts into percentage how much UV the window film blocks. People can develop skin cancer from UV rays. Doctors can actually prescribe a patient window tint for their vehicle if they have skin cancer or very sensitive skin that’s affected by UV rays. When you see the interior of an old vehicle that has spent the majority of its life outdoors, you can usually see how parts of the carpet, seats or dash can be very faded. This is caused by the sun’s UV rays. So if you are looking for window tint tulsa and want to protect the interior of your investment then purchasing window film with a high UV tolerance is recommended. XPEL Prime window films all block 99% of UV light. 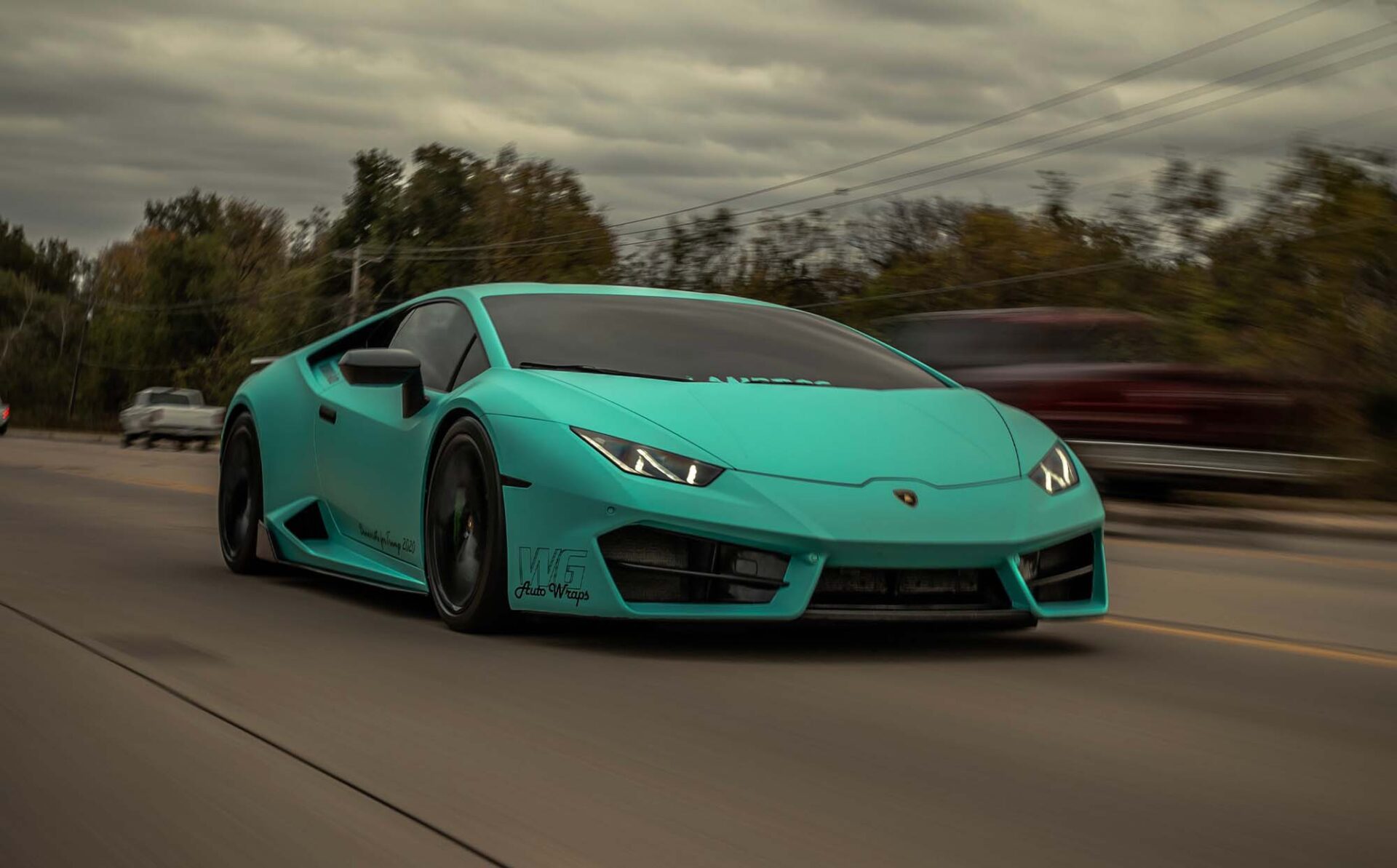 How dark can window tint go?

Most window film manufacturers will create window film that goes as dark as 5%. Just to explain window film darkness. You will usually always see the darkness of window film as a percentage. The percentage is actually the percentage of light the window film allows through. So for example, a 5% tint would mean it block 95% of light and only allows 5% of light to come through. So now that you have a better understanding of how the darkness of window film is displayed. Let’s get into the legality of window film. Even though window film manufacturers create very dark window film does not mean that it’s legal to have it on your vehicle. Window Tint laws vary from state to state. As far as Oklahoma window tint laws at the time of writing this are, cars must have nothing darker than 30% on their side windows and back windshield. As far as trucks, SUV’s and vans, this is where it changes a little bit. On these, the front 2 windows cannot be any darker than 30%, and any glass behind the 2 front doors can be as dark as you want. As for windshields, Oklahoma only allows window film to come down at a max of 5 inches from the top of the windshield. This is called a windshield brow. A windshield brow can be as dark as you want. Any other tint on the windshield is illegal. If you choose to come to us for window tint tulsa, we will be happy to answer any questions about dark tint. 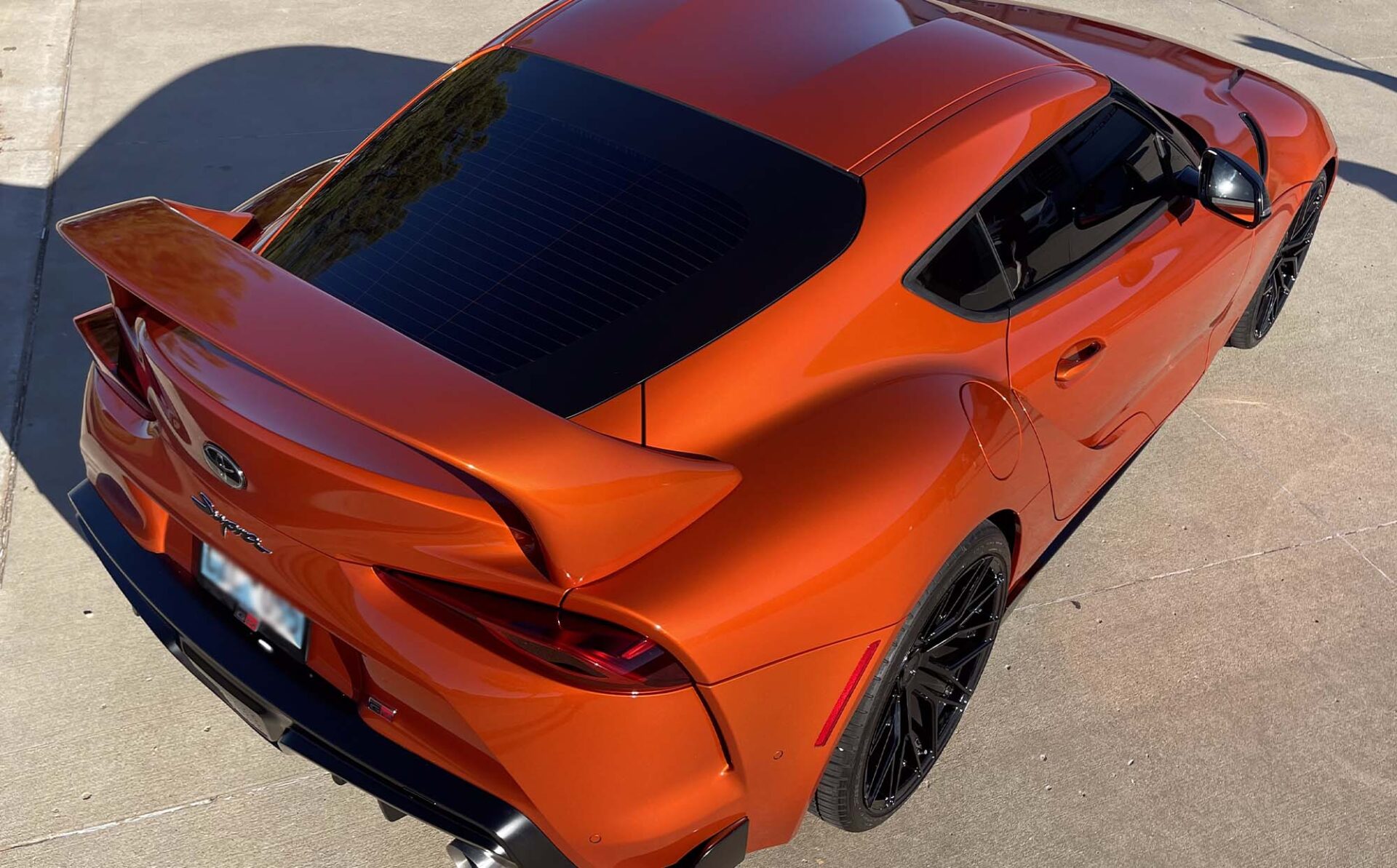 Are there different colors of window tint?

Yes! There are many colors when it comes to window tint. The majority of the big window film manufacturers just create a neutral black or charcoal color window film, this is the most popular. There is also reflective mirror window film that literally looks like a mirror from outside the vehicle, although this is great for privacy, it is also highly illegal. Reflective window film can be dangerous as it can temporarily blind other drivers. Then you have actual colored window film such as, blue, red, green, purple, orange, red, even chameleon color-changing window film. These types of window film are typically not found illegal as long as they are not reflective. A downside of colored window film is that these films are not popular, so if you do have colored window film installed, you never know how long it’s been sitting on a shelf, and this can drastically affect the life expectancy of the window film. When you get window tint tulsa at White Glove Auto, our XPEL Prime window films have a neutral black color which is what we found to look best on all vehicles. 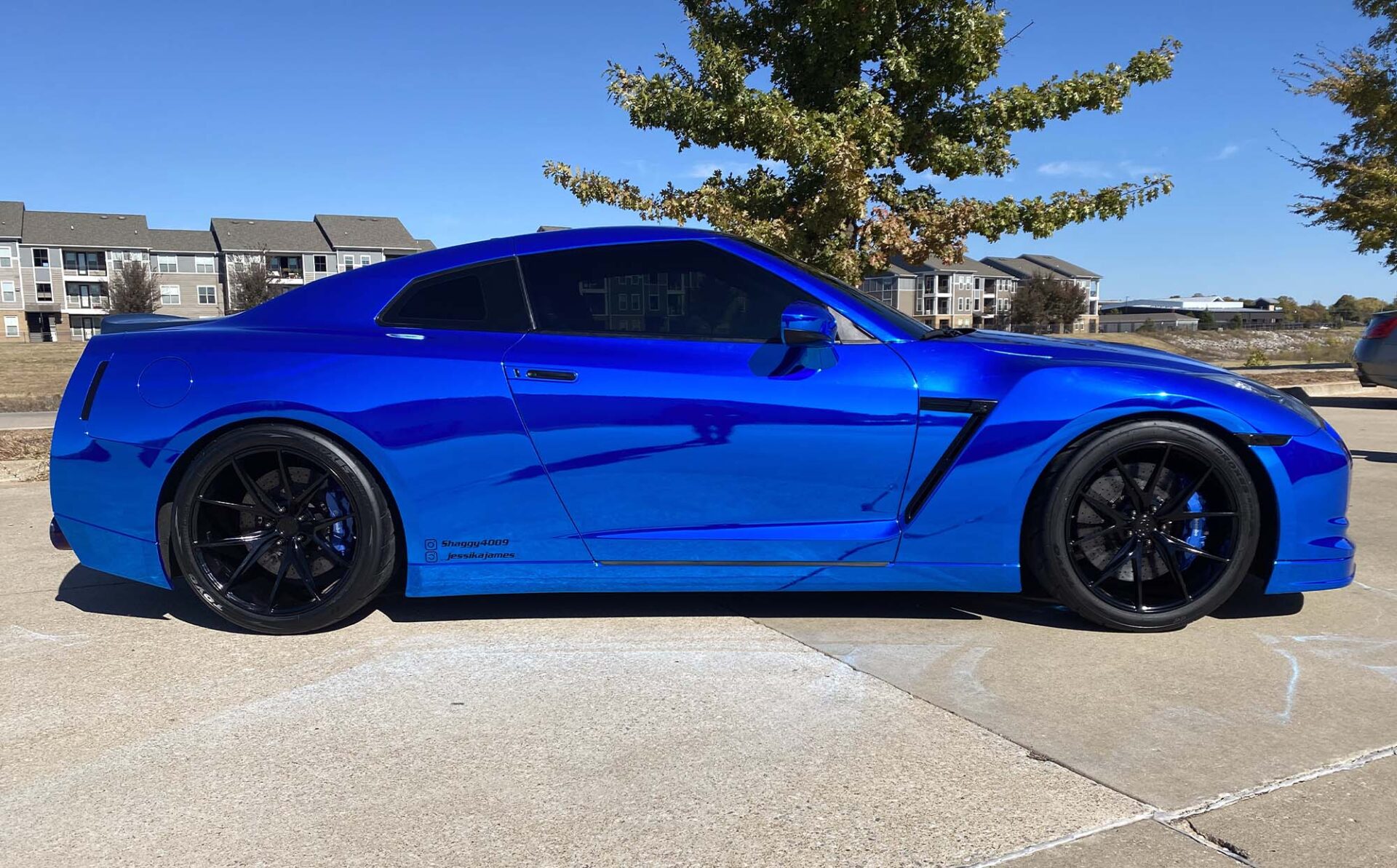 What should I expect right after my windows are tinted?

This all depends on the installer and the window film you had installed. At White Glove Auto when you get window tint tulsa you can expect a no roll down rule for 48 hours from when we installed the window film. Unless you purchased our express roll down which allows you to roll your windows down the moment you leave our shop. Aside from the roll down rules, some other things to expect would be small water pockets. Small water pockets are 100% normal immediately after a window film installation. The water pockets are formed because we install the window film with a soap and water solution and it’s impossible to squeegee 100% of the water out which leaves small water pockets that cure out on their own over 48-72 hours. Aside from water pockets, after the film cures and you see some small white looking specks in your window film, this could be what’s called contamination. The level of contamination all depends on the cleanliness of the shop, the installer, and the vehicle. So a lot can play into how much contamination gets into your window film. Contamination is specks of dust or dirt that get caught under the film. Now it’s normal to have a few here and there. But you have hundreds of specks then this is not normal. Especially for us at White Glove Auto. Our management team performs install inspection to ensure a quality install before releasing a vehicle back to the customer. So you can always rest assured that we will catch any excessive contamination. 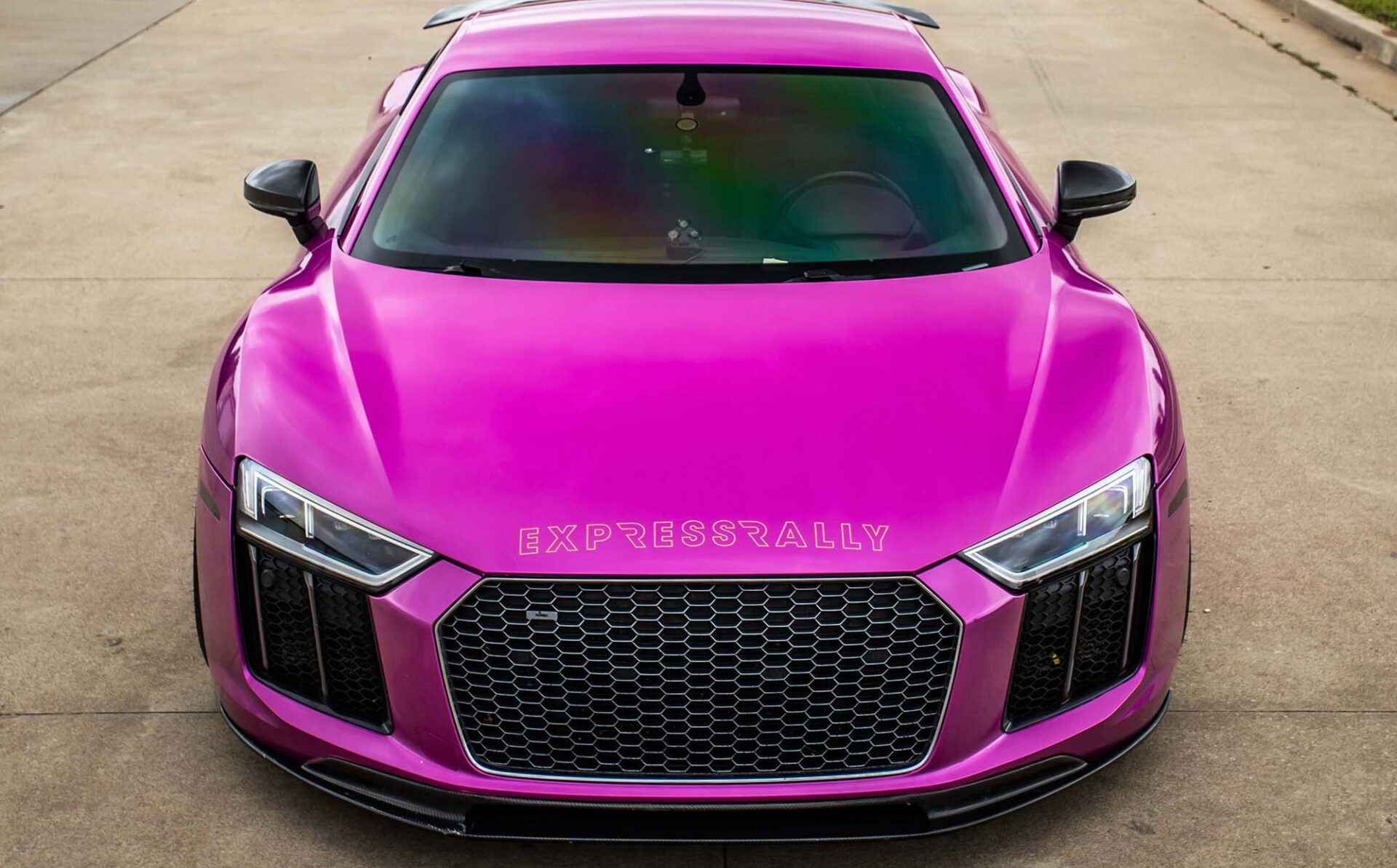